In September of this year, some of the world’s most famous writers signed an open appeal against the National Security Agency stating that the U.S. government’s mass surveillance impedes freedom of thought. Orhan Pamuk, Günter Grass, Margaret Atwood and Don DeLillo are among hundreds of “writers against mass surveillance” worldwide who have signed the open appeal, which calls on governments and corporations to respect citizens’ privacy rights.

The appeal states that:

‘Human integrity extends beyond the physical body. In their thoughts and in their personal environments and communications, all humans have the right to remain unobserved and unmolested.’

Dave Eggers has also signed the appeal, which is unsurprising given his latest offering, The Circle.

The Circle is the story of Mae Holland, a callow woman in her early 20s, who secures a sought after position at the Circle, an all-encompassing, hip social media and technology company. Imagine a mix of Google, Facebook, PayPal, Amazon and all the other large companies to whom we deliver and trust with streams of data on a daily basis. Run by the “Three Wise Men”, the Circle’s main aim is to create “one button for the rest of your life online.” Their goal is transparency in all things, the creation of a world where surveillance is not only seen as a good thing, but a gift.

A gift that we, the users, willingly receive and partake in.

s are urged to sefrom a programme that restocks your kitchen cupboards based on previous purchases to a chip imbedded in all children to eliminate child abduction.  Some of which, I imagine are being developed right now. 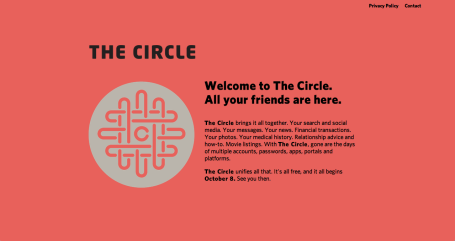 One of Eggers serious points in all this is to ask the reader to look at our own online presence and participation and to ask ourselves how blithely we are following this Yellow Brick Road to loss of privacy. Echoing the age old question of the tree in the forest, are we getting to a point where something doesn’t really ‘happen’ to us until it has been documented, shared and liked by as large an audience as possible? How culpable are we in the situation we find ourselves in? How much personal information have we given away without a second thought, to companies for whom no data is bad data? Maybe this vision of the future is all the more frightening because, we have in some ways, brought it upon ourselves.

In a recent online interview, Brett Easton Ellis said, ‘Some people still live in this shadow world of non-transparency and inauthenticity. I think that world is leaving us, because of – yawn! – technology, social media and the overabundance of sharing. You really can’t lie anymore.’

If we really couldn’t lie, if someone was watching, or could watch at all times, what would that do to human behavior? Authenticity and transparency are the heart of the second part of the novel as Mae goes ‘transparent’ wearing a camera at all times (with breaks for sleep and toilet use!), living in the 24 hour glare of the world and becoming a celebrity and spokesperson for the ‘closing of the circle’ when all people will be required by law to have a Circle account and conduct all business through it. One can’t help but think of the quote attributed to Mark Zuckerberg, ‘we are pushing the world in the direction of making it a more open and transparent place’ and be chilled to think of it in the context of this story where the mantra of the Circle is ‘All the Happens Must Be Known’.

Mae’s ex-boyfriend Mercer, less a character and more a mouth piece for Egger’s evident distrust of this technological future, is the lone voice of dissent, railing against this public life as he says, ‘I think you think that sitting at your desk, frowning and smiling somehow makes you think you’re actually living some fascinating life. You comment on things, and that substitutes for doing them.’ Given his fate, it’s clear to see where the book is headed. I’m not going to reveal any spoilers but the ending, when it comes, is an anti-climax, but a believable one given the thrust of Mae’s narrative.

There are some great set pieces; the shark scene, an awkward family dinner, the discovery of an unknown family history and while nuance and character development have been sacrificed for plot demands and ideas, I can’t really take issue with Eggers. When the ideas are this good, and the read is this enjoyable, it seems churlish to complain.