I have a confession to make. I cannot remember buying this book. I can only imagine that after a few glasses of wine and a browse on Flavorwire something about it tickled my fancy and off I popped to iBooks. Because that’s just how I (used to) roll.

I also have to confess; I haven’t read the Lemony Snicket books and didn’t know that he and Daniel Handler are one in the same. I don’t read YA or kids books (I’m kind of with Stewart Lee on that one) but I think I may just have done so inadvertently. I say I think because I’m not quite sure if this is a book for adults, a book for young adults or an adult young adult book. 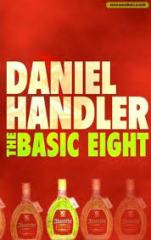 So, here’s the description of The Basic Eight from GoodReads:

Flannery Culp wants you to know the whole story of her spectacularly awful senior year. Tyrants, perverts, tragic crushes, gossip, cruel jokes, and the hallucinatory effects of absinthe — Flannery and the seven other friends in the Basic Eight have suffered through it all. But now, on tabloid television, they’re calling Flannery a murderer, which is a total lie. It’s true that high school can be so stressful sometimes. And it’s true that sometimes a girl just has to kill someone. But Flannery wants you to know that she’s not a murderer at all — she’s a murderess.

Told through 19 year old Flannery’s edited journals, The Basic Eight details Flan’s life with her clique of upper-middle-class San Francisco school friends, who desperately emulate adulthood by throwing dinner parties, carrying liquor flasks and attending the Grand Opera Breakfast Club. But, as we are constantly reminded, they are still children and how do these children react when they become embroiled in the death of popular student Adam State? Teenage squabbles take a darker turn as they dabble in absinthe abuse, cutting class, dating mishaps, poisonings and eventually, murder.

The Basic Eight is overall, entertaining. It has been optioned by the producers of As Good as it Gets and it’s easy to see why. The debt to Heathers is massive, high school clique, pretentious teens, poisoning, murder and my God, even croquet! This is Heathers meets Fight Club, with a dose of The Secret History and Othello thrown in for good measure and that may be my problem with it.

As a story, it feels derivative and the first half of the book has pacing problems and didn’t really grab my attention until things start to get messy. Yet when they get messy, the writing ramps up a notch and it careens along in bravura, exhilarating whirl of drunken excess, teenage angst and violence. The murder scene at the Sculpture Garden party is a fantastic piece of writing, perfectly capturing that haze and confusion of the drunken teenager. Well, it brought back a few memories of nights I can’t remember so it felt real to me!

If you like unreliable narrators, then Flannery Culp is as unreliable as they get. She is editing her high school journal from prison with the aim of exonerating herself and dispelling the tabloid myths that have grown up around her and her group of friends. She is creating a new version of events from her old version of events and contradicts herself from page to page while stating:

Could it be that our narrator is unreliable? No such chance. Mind like a steel trap, I have.

As a reader we have no clue what is real and what isn’t. Where are Flannery’s parents? Is she fat or thin? Why are we being asked study questions at the end of every entry? She constantly foreshadows and pre-empts what is to come and reminds us that nothing that is in this journal can be taken at face value:

Remember, I was hungover then, but typing this, I’m stone sober. Remember what’s real.’

What’s real? That’s the main question in this book, which has a twist that I saw coming from a mile off, but which feeds back in to the basic crux of the story. I’m not sure how successful the twist is and how it would bear up when re-reading, but the structure of the book allows Handler to get away with it. To his credit, the twist is really rather poignant, exploring as it does, the lengths teenagers will go to deal with the stresses and insecurities of life. The inconsistencies of her narrative create an unnerving statement on the irrationality and insecurity of teenage life.

The links between said teenage life, tabloid culture and serious violence have been explored before, most notably and more successfully in Vernon God Little and while The Basic Eight includes some mischievous satirical ideas (Oprah Winfrey and U2 are main targets) it falls short of creating any meaningful social satire or creating any meaningful discussion – this book is shooting at windmills.