I usually consider myself the type of reader who doesn’t fall for publishing hype, but a quick look at my Kindle would suggest that I fell for it big time when it came to the phenomenon of Gone Girl. I appear to have a slew of ‘psychological thrillers’ from oddness of The Shining Girls to the excellence of Before I Go To Sleep, all of which seem to have been marketed as the next ‘Gone Girl’ in an attempt to get them noticed. 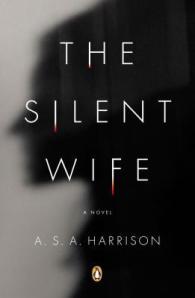 The Silent Wife falls into this category, but for me has neither the page-turning readability of Gone Girl nor an interesting hook – time travelling serial killers, amnesia – of The Shining Girls or Before I Go to Sleep. It’s psychological for sure, but thrilling? Not so much.
The Silent Wife documents the unravelling of a seemingly perfect 20 year relationship and is told in alternating ‘Him’ and ‘Her’ chapters. Jodi is a 45 year old therapist who has a comfortable life, working two days a week from her luxurious condo apartment, attending Pilates and flower arranging classes and preparing dinner for her husband Todd. Todd is also happy with his comfortable life, a property developer who is partial to smoking weed in the morning and rounding off the working day with an upmarket ‘date’ or whichever woman he is currently seeing, before heading home to chilled white wine and canapés with Jodi. Jodi knows about the philandering and Todd knows she knows, but,

It simply doesn’t matter that time and time again he gives the game away, because he knows and she knows that he’s a cheater, and he knows that she knows, but the point is that the pretence, the all-important pretence must be maintained, the illusion that everything is fine and nothing the matter.

Unfortunately, Todd has given up on the pretence and has started a relationship with the 20 year old daughter of his best friend and suddenly his private proclivities have encroached on Jodi’s domestic bliss. Added to this, Jodi and Todd have never married and Jodi is set to lose everything. So the stage is set for thrills and we are told on the second page that for Jodi,

a few short months are all it will take to make a killer out of her.

And for me, that is pretty much where the thrills stop. What follows is a strange case of two seemingly successful and intelligent people making very odd decisions and having no self awareness whatsoever. Given that we are ostensibly inside their heads, Harrison uses an omniscient point of view which puts a distance between the reader and the characters that almost prevents any sense of involvement. Jodi and Todd are unlikeable characters doing unlikeable things, but that should be neither here nor there.
Harrison’s use of the omniscient point of view also allows for digressive passages on the topic of psychology which can be oddly jarring. Out of nowhere there will be paragraphs like this:

That pickle jar you threw away all those years ago may have gone to landfill, but it still exists out there. It may be broken, even crushed, but it hasn’t disappeared. It may be forgotten, but forgetting is just a habit. In this analogy the landfill is the unconscious mind. Not the collective unconscious but the personal unconscious – your own individual, private, idiosyncratic wherein every object is inscribed with your name and stamped with your number

I can’t remember a time when I have read a metaphor in a novel and then had it explained to me. The novel also includes word for word transcripts of Jodi’s past visits to her psychiatrist which jar with the flow of the narrative and seem to form little purpose other than to give us a twist in Jodi’s past which appears to make no obvious difference to the plot.
The prose is flat and passive, descriptions of dinners cooked and outfits chosen are intoned in the same dulling manner as discussions over the best way to hire a hit man to kill your husband. It was this bald recitation of facts that I found numbing and given this is a story concerned with the intimacies of human relationships, the deliberate detachment of the reader from the central relationship makes this a frustrating read.
From a personal point of view, I also took exception to a lead female character who felt she could accept her husband’s general infidelities; his affair with a family friend half her age; his impregnation of said girl, even his leaving her. But the killer for Jodi (if you’ll pardon the pun), the moment that pushes her over the edge is the possibility that she might lose her house. Could an intelligent, well-educated woman with her own part time career really think of no other way to support herself than to kill her partner and benefit from his will?
I appear to be in the minority with my view of The Silent Wife, which was critically well received and I can understand it being seen as a frighteningly possible portrait of a marriage where things have slipped too far and of how murder can insidiously, begin to seem like the only option. But the lack of any thrills and the inclusion of several twists that didn’t add anything to the story meant that this cold, detached tale kept me at arm’s length.