I remember as a child, there was a house on our street that we all thought was haunted. We would dare each other to run up the tree lined driveway and touch the dark house before running back to the safety of the streetlights and our friends. There was a story about the ghost who lived inside and reading We Have Always Lived in the Castle, I was struck that it wasn’t a haunted house story as such, but the tale of how the myth of a haunted house is comes in to being. 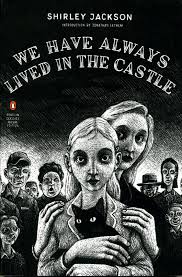 This short but beguiling novel tells the tale of two sisters, Constance and Merricat Blackwood who live with their Uncle Julian in a large castle and the end of a village. They are surrounded by villagers who hate them as they are the only survivors of a scandalous poisoning incident six years previously that killed the rest of their family. Constance was acquitted of the crime and the three live an insular, ordered existence until a cousin, Charles appears with dubious intentions and shatters their peaceful routine.
I don’t want to reveal too much about the plot of We Have Always Lived At The Castle, as I went into it knowing very little and was rewarded for it. This is ostensibly a domestic novel, set mainly in a kitchen of the grand house, focusing on routine tasks, cooking cleaning, shopping and growing vegetables. Food is fetishised as the giver and the remover of life, as these three characters ‘eat the year away’ through lovingly prepared meals in a stark contrast to the poisoning in the past. Yet Jackson’s great skill is in locating the unsettling in the midst of the mundane, the terror in the ordinary. As I read, a sense of sheer dread built up in me. The back story is slowly revealed, Merricat teases us with what she knows and as the drops details of the crime at the heart of the novel like crumbs of bread , leading the reader to the knowledge of the utter horror of what has happened.

Merricat is a wonderful literary creation, feral yet poetic, lonely but loving, insightful and fantastical. The wonderful description she gives of herself at the start of the novel pulling together all the competing strands of her personality.

My name is Mary Katherine Blackwood. I am eighteen years old, and I live with my sister Constance. I have often thought that with any luck at all I could have been born a werewolf, because the two middle fingers on both my hands are the same length, but I have had to be content with what I had. I dislike washing m myself, and dogs, and noise. I like my sister Constance, and Richard Plantagenet, and Amanita phalloides, the deathcup mushroom. Everyone else in my family is dead.

She is a compelling character, practicing magic of her own invention, talking to her cat and as likely to make you a bed of twigs and leaves if you have nowhere to sleep as she is to burn your house down if you cross her. She is a mass of contradictions, a grown woman with the habits of a child, unable to grow in the cloistered environment of the Blackwood home. On paper, Constance, her sister, may seem like the weaker of the two, but she is no less fascinating. Her wish to protect and care for her family comes first and a lot of the tension of the novel comes from the possibility that she might choose Charles and village life over her sister’s fantasy of a home ‘on the moon’.
But the bond of sisterhood, no matter how twisted that bond may be, is what drives everything in this novel, and the ‘fairy tale’ ending is both literal and ironic. The reader is left with a Grimm’s tale for modern times, where Merricat’s ‘magic’ has worked it’s spell and given her the realm of equivalence yet we are left to wonder, like the villagers creating myths around them, what will become of these damaged yet resilient sisters.

We Have Always Lived at the Castle was an engrossing, blackly humorous, terrifying read. I usually include spoilers in my reviews, but I would hate to take away anyone’s enjoyment of coming to this book for the first time. I haven’t been able to stop thinking about Merricat and Constance, as so much of this story could continue to be told, but Jackson knows when to pull back, when to leave the reader with the most morbid of happy endings.

For anyone who wants to read along, my next read is Let the Right One In by John Avijide Lindquist, which I am reading as part of the Estella Project. 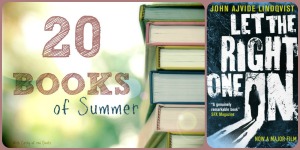