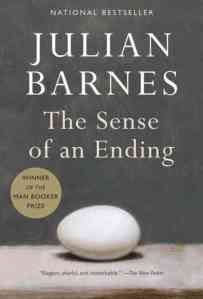 I’ve sneaked in another little novella, too tempted by my proximity to the magic 600’s to stick with The House of Mirth (which I reiterate again, I am really enjoying!). The Sense of An Ending may be short on pages, but it’s not short on ideas exploring as it does memory, history and self-denial.

I rarely ended up fantasising a markedly different life from the one that has been mine. I don’t think this is complacency; it’s more likely a lack of imagination, or ambition, or something. I suppose the truth is that, yes, I’m not odd enough not to have done the things I’ve ended up doing with my life

The first half (and more successful) of the book explores Tony looking back on his ‘book hungry sex hungry’ days in sixth form, focusing on his friendship with the intellectual and unknowable Adrian and Adrian’s subsequent suicide and his first relationship with the prickly and provocative Veronica including a strange weekend spent at her parent’s house. Tony is the ultimate unreliable narrator, telling us on the first page that

If I can’t be sure of the actual events anymore, I can at least be true to the impressions those facts left. That’s the best I can manage

Using the study of history as metaphor, Barnes makes it very clear that we can’t trust what Tony is remembering. His is a subjective voice, we have no corroboration. He is no longer in touch with his friends from that time and he has kept no mementoes.

Discovering, for example, that as witness to your life diminish, there is less corroboration, and therefore less certainty, as to what you are or have been

A solicitor’s letter that bequeaths him Adrian’s diary in a will, throws these memories into disarray and he starts to question everything that happened forty years ago and everything that has happened since. The expertly stitched memories of the first section of the book are slowly picked apart as Tony resumes contact with Veronica in an attempt to get his hands on Adrian’s diary.

The influence of particular memories can persist throughout adult life, making us who we are, who we believe to be. The suppressing of certain memories can do the same and as documents and facts come to light about what happened to Adrian, Tony starts to remember things differently, memories surface, some pleasant, some painful. Proof surfaces of actions he had forgotten carrying out. The cause and effect of what he thought had happened in their shared history is not as it once appeared. Veronica keeps berating him for the fact that he ‘doesn’t get it’ despite the fact that he does his best to ‘get’ what happened to Adrian.

There is a secret at the heart of The Sense of An Ending. I don’t want to give it away but for me it wasn’t convincing and the build up to it was more than the reveal. But I don’t think that’s the point. The point is that, like Tony Webster, there is so much that we ‘don’t get’ in our lives, not only other people, but so much of ourselves that we just ‘don’t get’ or choose not to examine. In fact, given the nature of the book with its patterns and repetitions, the way it scrutinises its own structure, the way we learn everything from the point of view of Tony and no one else, the ending may not even be the right one. Just the ending Tony can live with now that all of his certainties have been undermined. The truth of this novel is as deeply embedded as the most buried of memories. As the title says, we are being given the sense of an ending, but maybe not the ending itself.

As a psychological thriller of sorts, The Sense of An Ending doesn’t really add up. Nor do I think it’s supposed to. As a treatise on ageing, memory and self-delusion however, it is superb – written with precision and lucidity. How do we know what we remember is what happened? How can we be sure of who we truly are or truly have been?

Time…..give us enough time and our best-supported decisions will seem wobbly, our certainties whimsical.

Now, I promise, The House of Mirth is next.