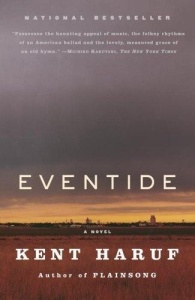 My Reading Roulette for December was a tie and on the day that the last vote was cast, I learned that Kent Haruf had died aged 71 and as the obituaries and plaudits flowed in for his Plainsong trilogy, I was glad of the serendipitous nature of the voting.

Eventide is the second in the Plainsong trilogy which centres on a number of families living in Holt, Colorado. At the heart of the novel we return to the aging McPheron brothers, who are learning to live without Victoria Roubideaux, the lost single mother they took in, who is now leaving for college. Circling around these central characters are a lonely young boy taking care of his aging grandfather; a disabled couple desperately trying to get their lives on an even keel with the help of their social worker and an abandoned mother of two girls, trying to come to terms with the breakdown of her marriage. The lives unfold in simple, unadorned language and as they intersect and change, Haruf explores larger truths about family, resilience, cruelty and love.

There is an instance in the book where Tom Guthrie – who featured prominently in Plainsong – discusses the weaning of cattle with his son Ike;

They never do like it, he said. I can’t imagine anything or anybody would like it. But every living thing in this world gets weaned eventually

All characters in this beautiful novel are being weaned from some relationship or another, wives from husbands, brother from brother, children from parent. Eventide is the story of families, be they coming together or falling apart. Within the understated description of everyday life, Haruf shows us the acts of violence and desperation that change those lives, for better or worse. He explores human relationships and love through sparse direct storytelling, the lack of embellishment that only adds to the authenticity of the tale. There is little inner monologue in Eventide, little descriptive prose but Haruf tells us what we need to know, his quiet restrained voice asking us to stop, take our time and pay attention to these lives, so that we can in turn, pay attention to our own.

Haruf writes with great skill and confidence from the point of view of children, whose stories are always of equal importance to the adults in his books. In Plainsong, we heard from Bobby and Ike Guthrie and in Eventide the harshness and pain of this world is explored through the experiences of DJ Kephart, a young orphan looking after his elderly grandfather and Joy Rae and Richie Wallace, abused by their uncle and under the watch of Social Services. These children do not have it easy, shouldering responsibilities and wisdoms beyond their years and looking for affection and an alternative family wherever they can, be it in the smile of a kind barmaid or a shed dressed up with found objects to look like a home.

So, for a while the two sisters and the boy lay on the floor under the blankets, reading books in the dim candlelight, with the sun falling down outside in the alley, the three of them softly talking a little, drinking coffee from a thermos, and what was happening in the houses they’d come from seemed, for that short time, of little importance

Haruf has been accused of being sentimental but, Eventide presents a darker side of family life. The hope and warmth of home life is eked away by the sheer economics of trying to survive, from the Wallace’s counting their food stamps, to Mary Wells having to move to find work. There is little sentimentality in the relentless hardships of illness, cruelty or accident, the kick of a bull or the whip of a belt. Instead of sentimentality, Haruf gives us a counterpoint of small moments of comfort, routine and kindness, a very ordinary kind of love.

At ten o’clock they turned on the old console television to catch whatever news there might be showing from somewhere else in the world before they climbed up the stairs and lay down tired in their beds, each in his own room across the hall from the other, consoled or not, discouraged or not, by his own familiar time-worn memories and thoughts.

What is most striking about the book is the prose. I can’t think of another author who writes this way. Haruf crafts his story in such an unadorned deceptively simple way that you are slowed and read with intensity, savouring every carefully chosen word.

He studied the menu printed on the pasteboard above the counter while the McPheron brothers leaned forward over their plates and began to eat. He reached in the hip pocket of his pants and withdrew a blue handkerchief and blew his nose, shutting his eyes all the while then folded the handkerchief and put it away

The spare language perfectly evokes this place, these people. It is confident writing, with no posturing; only clarity and insight, restrained and moving like an old gospel hymn. It is as if without the frills, he manages to get to the heart of what we experience when we love someone, be it a child, a partner or a brother.

Victoria was still seated in the chair beside Raymond’s bed. Since they left two hours earlier she had not moved. It was as if she would not even consider the possibility of moving, as if she thought by sitting by his bed, refusing to move, she might prevent anything else from happening to him, or to anyone else she loved in this world.

This is spare, heartbreaking writing, brave writing, that is always humane. Haruf doesn’t need metaphor or authorial comment; he is giving us the story of the people of Holt as they struggle to live with dignity and some kind of hope. He doesn’t give is any easy answers, because life doesn’t and because of that, his story shines bright with truth.

At the end there is no dramatic action, no emotional climax, instead, what we are left with a sense of acceptance;

And still in the room they sat together quietly, the old man with his arm around this kind woman, waiting for what would come.

It’s all any of us can do and while we are waiting, the simple moments in life nourish us. This beautiful book is a reminder that it is these simple moments that we will miss the most when they are gone.