Do you ever read a book, read the effusive praise from the critics and then totally doubt your reaction to it?

That’s where I find myself with How I Live Now – Meg Rosoff’s award winning, critically acclaimed, Hollywood courted YA novel which left me personally feeling, well, underwhelmed.

Let’s start by saying that as a 40 something mother I am not the target market for How I Live Now. I bought it years ago, but didn’t realise it was a YA novel until quite recently. I have absolutely no problem with YA, but I do feel that there comes a time in your reading life when the emotional connection you make with the material you are reading depends on where you are and what have experienced.

How I Live Now is the first-person story of Daisy, a smart yet self-absorbed 15-year-old who arrives from New York’s Upper West Side to stay with her Aunt and her four English cousins in their romantic and eccentric rambling English farmhouse, where the children live a partly feral, partly bohemian lifestyle, eschewing school for nature and rules for telepathy and smoking. Sixteen year old Osbert is the only one who goes to school, eight year old Piper is ethereal and wise beyond her years and one of the twin boys, Isaac talks to animals. It would be enough to enchant snarky, cynical Daisy without the added complication of her falling in love with the other twin boy Edmund.

As their relationship develops, Aunt Penn (some sort of international peacekeeper) goes to Oslo to work on averting an imminent war – details are not greatly forthcoming in How I Live Now – and the children are left to fend for themselves in a kind of Swallows and Amazons idyll as war inevitably breaks out. Their initial experience of life in war time is mainly a joyous one where the absence of adults can allow a teenage incestuous relationship to bloom.

But the summer I went to England to stay with my cousins everything changed. Part of that was because of the war, which supposedly changed lots of things, but I can’t remember much about life before the war anyway so it doesn’t count in my book, which this is.

Mostly everything changed because of Edmond.

There appears to have been quite a brouhaha about the incestuous nature of the relationship between the two cousins – I can’t say it bothered me in the slightest, but then I am a child of the 80’s where reading Flowers in The Attic at an impressionable age was a rite of passage. Some passionate kissing between telepathic cousins is tame in comparison. However, it also didn’t bother me because the relationship between Daisy and Edmund never felt real for me.

In fact, very few of the characters did. Daisy’s narrative voice is one of frenetic breathlessness, sarcasm and the use of capital letters to denote Something Amusing or Acerbic. The book barrels along with a lack of both punctuation and insight. The enjoyment of the book rests solely with Daisy’s narrative and for me the incessant ironic patter was telling me a lot, but not making me feel anything. Daisy may be entertaining, but she is distancing.

Given that Daisy tells us that everything changed because of Edmund, it is interesting that the majority of the books is not really about them at all. Their relationship acts as bookends to the main survival tale of Daisy and Piper once war comes literally to their door.

The details of the war remain vague, its interpretation being mainly through the offhand eyes of Daisy. When the first bomb goes off, Daisy informs us,

in the middle of a big train station the day after Aunt P went to Oslo and something like 7,000 or 70,000 people got killed.

Now, I know that the children are supposed to be disinterested in world affairs and self-absorbed, but given that their mother is in a different country and that Daisy is unable to get in touch with her father, it’s a stretch of the imagination to think that they wouldn’t have a little more interest in what is going on in the world. As such, when the violence does affect them directly – and there are some particularly gruesome scenes in the book – there is little emotional connection to make the reader care about the situation the children find themselves in. The war is depicted as part World War II adventure story and part End of Days apocalypse which is a nice touch but never fully coalesces into a solid portrayal of a particular experience.

The second part of the book – five short chapters – is more satisfying. Possibly now Daisy is six years older this is in contrast to the voice of her younger self, the darker tone echoing her more mature, experienced self. But as the whole book is written in a narrative voice that is looking back on past events, it would have been more successful for me if there had been some of that insight in the earlier chapters.

There is some nice writing in the book; a jam sandwich ‘tasted hopeful’, Daisy has issues with nature because ‘the rules are not all that precise’ but overall it didn’t make me feel very much and as a consequence it didn’t make me care. I think I might find the movie adaptation more enjoyable given that seeing the sketches of other characters depicted in the book played by real people, might make their plight seem more real too.

I don’t like to come down too hard on a book that clearly isn’t written for my age group and I would probably have loved this when I was 14, but when I think back to the books I did love at that age, books like Judy Blume’s Tiger Eyes and Deenie, I seem to remember issues of grief, death and disability being dealt with in a much deeper, much less stylised way.

Like I said at the beginning, I seem to be very much in the minority when it comes to How I Live Now so I would be interested to hear your thoughts on it too. 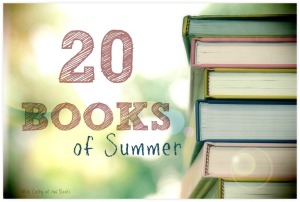