Malcolm Orange Disappears states its case as a novel with a difference from the opening lines,

Malcolm Orange was beginning to disappear.

On Monday evening, preoccupied by the tiny perforations which had just that morning appeared all across his forearms, he excused himself from the supper table early

In a magic realist world that combines the best of Irish storytelling with the great American road trip, this is the tale of 11 year old Malcolm who, following the disappearance of his feckless father and years spent moving from town to town, is now living in a Baptist Retirement Village in Portland, Oregon with his mother and baby brother. While his mother looks after the elderly residents and fights the urge to take to the road again, Malcolm Orange tries to solve the mystery of his disappearing with the help of his ageing retirees and his new friend, the neglected and belligerent Soren James Blue (Sorry for short).

However, even Malcolm Orange, blessed as he was with the overleaping imagination of an Old Testament prophet, struggled to imagine the superhero potential in being eleven years old and perforated.

Jan Carson shares Malcolm’s overleaping imagination and the prose in this vibrant book is jammed with ideas, quirky turns of phrase, strange names and unbelievable stories. The effect feels like a champagne cork exploding and the best thing to do is to go with what flows out in all its glorious detail and vibrancy.

The novel is an episodic one, with the main narrative thrust often being pushed aside in favour of detailed stories about minor characters, all worthy of books of their own. Carson herself has described the books as

It’s more like a twelve car pile-up on a road where everyone’s heading in roughly the same direction at a variety of different speeds.

There is Cunningham Holt, the blind man with marbles for eyes whose story of finding and losing love is heart-breaking and who provides the heart and soul of the story. There is Mr Fluff, a talking cat and the sinister Dr Blue, who runs the retirement village and wants to ban music to the disgust of The People’s Committee for Remembering Songs. Add to this obsessive tomato growers, sheds that disappear into the ground and grandparents who awkwardly die during Ghostbuster screenings and there is a lot to take in.

One character called Junior Button, tells the fantastical and unforgettable tale of magical flying children which has a particular resonance for Malcolm’s mother Martha.

The old man’s capacity for distraction was awe-inspiring. Whilst Martha Orange did her best to hold him to the highway, he favoured the by-ways and cul-de-sacs, molding myths around minor characters, formulating legends from the footnotes

The same can be said of Carson, and while the writing is always lively and bursting with ideas, the narrative sometimes struggles under the weight. The book feels disjointed, like a series of cartoonish short stories, tied loosely together by Malcolm and his malady. Malcolm may be disappearing but his world is filling up with magical tales and unbelievable happenings that occasionally threaten to submerge the whole enterprise.

There is however, a great warmth and tenderness at the heart of the novel. The intergenerational friendships between Malcolm and the residents of the Retirement Village are described with a real joy and the irony that they are investigating Malcolm’s disappearance while their own lives slip away is never far from the surface. God is never far from the surface either and as befits a tale set in small town America, and the narrative is packed with preachers and pastors and faith lost and found as Malcolm tries to make sense of his life through his Jesus God.

Over the course of the last decade, Malcolm Orange had daily prayed a series of humble, selfless prayers, which in his small opinion, were absolutely achievable by a God who claimed (with little significant evidence) to have created the entire universe in less than a week…

On paper, God was someone worth believing in. In reality he had yet to deliver on the dogs, the bunk beds, the death rays or kick ass siblings Malcolm Orange had asked for over the last ten years.

Underneath all the shimmer and shine of the narrative, when it does stop for breath, there is a very touching tale of a mother and son trying to make a life together in the most difficult of circumstances. Martha, unable to show true affection to her sons, kisses the items in their home instead

This seemed like a basic design fault for she remained chronically incapable of visiting the actual, physical affection upon her two sons, choosing instead to bless them by proxy, as if attempting to leave a thin sheen of love on every surface they might possibly touch

Her inability to remain grounded becomes less of a mystery as the story unfolds and in the end, the magic Malcolm encounters and the magic he needs is of a more worldly kind and is found in a mother’s embrace.

The writing is poetic and striking. Of Martha Orange we are told;

For thirty seven years she’d carried her feet like a pair of nervous pigeons, compliant for the most part, permanently coiled in anticipation of flight.

While Soren James has a laugh

Like fireworks going off, indoors and underwater. It was a thick and wonderful noise to stand under.

When you think of Irish literature, magic realism doesn’t necessarily spring to mind. Jan Carson has written an exuberant, moving and very brave first novel that doesn’t ask the reader to believe in miracles so much as to jump into this magical world and go where it takes you.

Malcolm Orange Disappears crams a lot into its narrow story and often feels like it’s bursting at the seams. While it has some structural issues, it is undoubtedly a warm, funny, vibrant and original book and marks Jan Carson out as a real talent to watch. 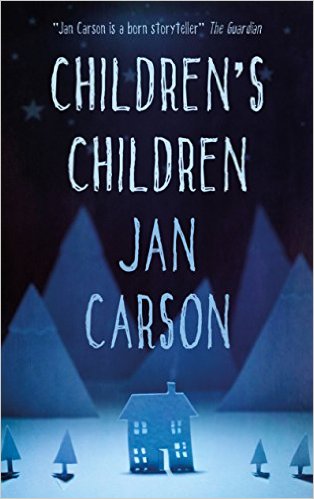 She has just published her new collection of short stories Children’s Children and you can read her short story We’ve Got Each Other and That’s A Lot online here.