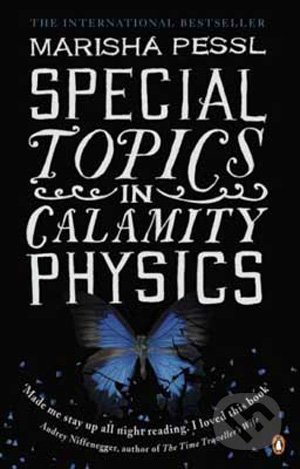 Marisha Pessl’s debut novel was published amid a storm of hype – publishing bidding wars, support from Jonathan Franzen, that famous head shot and articles in The New York Times, and all before it hit the shelves. It is a heavy burden of expectation for any book, but Special Topics in Calamity Physics almost fulfils it. Almost.

The novel is the first-person narrative of Blue Van Meer, a precocious and bright teenager who since her lepidopterist mother’s death has travelled with her father Gareth, an academic on the move, taking up visiting professorships in schools around the country. Brilliant and arrogant as he is, he is devoted to Blue and her intellectual stimulation and they travel across the country Paper Moon style, discussing books, poetry, theatre and film which leaves Blue almost pathologically bookish.

It was always Dad and me, the way it was always George and Martha, Butch and Sundance, Fred and Ginger, Mary and Percy Bysshe.

For her final year of high school, they settle in a private bohemian college in North Carolina where

Here Blue encounters a group of elite students, the Bluebloods and their charismatic and mysterious Film Studies teacher Hannah Schneider with whom she is immediately captivated.

Most extraordinary though was the air of a Chateau Marmont bungalow about her, as sense of RKO, which I’d never before witnessed in a person

Blue is surprised when Hannah invites her to join their elite little group and begins to question Hannah’s interest in her, but a mysterious death and an even more mysterious suicide, means that this coming-of-age high school novel shifts gears and turns into a full on detective thriller.

If this sounds a bit like The Secret History, or The Prime of Miss Jean Brodie, well, it is probably meant too as this is a novel about literary borrowing and literary conventions. The book is presented as a syllabus, with each chapter named after a great work of literature (Othello, Madame Bovary) and it finishes with a ‘final exam’. The narrative is peppered with literary quotes and references, many real, but some made up.

The doorbell rang. I was terrified and immediately imagined all kinds of wicked Bible salesmen and bloodthirsty misfits (see O’Connor, The Complete Stories, 1971)

These Tourette’s like bibliographical references are amusing at first, but have a tendency to bog down the story. As a means to show Blue’s Salingeresque bookish, self-aware nature and the influence of her father’s intellectualism on her life, they do serve a purpose, but at times they are shoe-horned in with a certain lack of subtlety.

However, the source of a lot of the pleasure that is derived from Special Topics, is that very literary knowingness which brings the reader – feeding our pride in our own ability to recognise her references. The literary net spread wide across all the characters, from Blue’s dull potential suitor who is like ‘a 12-line poem of repetition and rhyme’ to the gas station attendant with a King Lear obsession.

In the writing itself, there is also much to justify the hype. Pessl’s prose is energetic and often dazzling, veering off in marvellous directions, sometimes sweeping the reader along and sometimes leaving you gasping in its wake. Undoubtedly, she has great descriptive flair. A pair of red-haired twins ‘resembled two oily portraits of King Henry VIII, each painted by a different artist’ while Blue’s headmaster

smiled encouragingly, but I doubt it meant much; he seemed to hand out smiles like a guy in a chicken costume distributing coupons for a free lunch

Others though, miss the mark. A character ‘bites his nails into thumbtacks’ which seems clever but doesn’t actually stand up to scrutiny and often the characterisation can feel like it lacks a depth despite all the surface charm.

As more and more alliteration, metaphor and imagery is piled on, this book can often be tiring to read, but it kicks into gear in the final third as it morphs into a real page-turner of a mystery when Blue turns detective to try to unravel the death of Hannah Schneider. The turn of events is unexpected but it is clear that everything up to this point has been a laying of ground work, a perfectly paced and smartly structured work of fiction, whose clues have been there all along if we had just paid attention. The brave ending, which is both resolved and open ended explores the isolation and pain of adolescence – that time when things we thought we knew and could take for granted are less solid than we believed.

Underneath the literary illusions and clever narrative structure, there is a really solid and substantial novel here. Your enjoyment of it will entirely depend on your reaction to the writing style. The book ends with a true or false final exam for the reader which suggests that everything we have read is open to interpretation, and that in life, the reader, like Blue, can never be sure of the real truth, because a definitive truth rarely exists.

And the idea that none of us can truly know anything at all – not the lives of our friends or family, not even ourselves – is a thought they’d rather be shot in the arm with their own semi-automatic rifle than face head on. Personally I think there is something terrific about not knowing, relinquishing man’s feeble attempt to control. When you throw up your hands, say ‘Who knows?’ you get on with the sheer gift of being alive’

This is probably the right approach to take with Special Topics in Calamity Physics, to just accept the sheer gift of it. While it can at times be too clever for its own good, it has at heart a love of fiction as a transformative power, a belief in knowledge and learning, and a massive amount of ambition.