Today on the blog, I am delighted to welcome the very talented Rosemary Jenkinson to chat about her work.

Rosemary is an accomplished short story writer and playwright, who has just finished her year as Artist-in-Residence at the Lyric Theatre, Belfast.

Born in Belfast in 1967, Rosemary has published two collections of short stories, including Aphrodite’s Kiss, and her plays have been performed in London, Dublin, Belfast, Edinburgh, Washington DC and New York. Her first play, The Bonefire, was winner of the Stewart Parker BBC Radio Award. Here Comes the Night premiered on the main stage of the Lyric, Belfast, in 2016. She has taught English in Greece, France, Poland and the Czech Republic. She lived in London as writer-on-attachment at the National Theatre Studio. Her new short story collection Catholic Boys will be published by Doire Press at the end of April.

Can you tell us a bit about the day-to-day process of your writing? Do you set aside specific time and place for your writing?

I’m up and at it straightaway. I just hop from the bed to the PC. Tea and toast with Marmite, quick wash of the face and I’m off. I have back pain so writing in the evening is harder. Sometimes if I have a play deadline I get up at three a.m. when my back is fresh after sleeping for a few hours and work till dawn, then sleep another few hours and start writing again. I don’t write every day – only a novelist has to which is why I choose to write short stories and plays!

You have been quoted as saying ‘I’m a Belfast Protestant but I’m an Irish writer’. Do you consider yourself an ‘Irish’ writer or part of an Irish tradition?

Yes, I am part of an Irish tradition in that I love the pub, love the vernacular, I have no respect for hierarchies and I treat tragedy with a dollop of black humour. Like a lot of Irish writers e.g. Friel and Behan, I write both prose and dialogue. I call myself a Northern Irish writer much less these days because contemporary writers aren’t that valued in Northern Ireland – if only they were!

Your work has been featured in The Glass Shore and Female Lines and the recent Waking the Feminists movement has tried to address the marginalisation of women writers in theatre. Do you feel that women writers are marginalised in favour of their male counterparts and is enough being done to redress the balance?

You’d have to be blind not to see that women are side-lined. Waking the Feminists improved things for a year but now it’s back to how it was with men hogging the main stages. Male writers tend to club together and label each other as geniuses which makes critics and journalists swoon over them. I think women writers have to fight back against this by appropriating the word ‘genius’ for themselves. Some people still have this outdated notion that women’s writing is about the home. My work couldn’t be more different – my latest play is about homelessness.

Who are your favourite female writers?

You are a playwright and a short story writer. Do you have a preferred discipline and do you think that writing for the stage influences your fiction, or vise versa?

Writing is writing – I love it whatever I write. Plays and short stories suit my taut, succinct style. If an idea doesn’t work on stage, I might have a go at it as a short story but it wouldn’t work vice versa. The whole secret of writing is to match the right material with the right form. 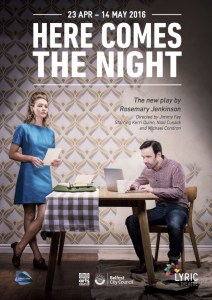 Your theatre work has a real social and political slant, dealing with issues such as homelessness, political corruption and the refugee crisis. Can you tell us a bit more about that?

The best theatre is political. As Dario Fo said, ‘Every artistic expression is either influenced by or adds something to politics.’ Theatre needs to make a communal impact and it can effect social change. Since short stories are read in private, the political aspect is less important, but my stories still deal with ex-paramilitaries and immigrants. George Bernard Shaw said, ‘Write about yourself and your time and you’ll be read for all time.’

Your rapid response plays on the political situation in NI are proving extremely popular. Is this something you are going to continue doing?

Funnily enough, I’ve just written a brand new Michelle and Arlene, the third in the trilogy. We’re waiting on our brilliant actors to be available and then we’ll hit the stage. The stalemate at Stormont is ripe for lampooning, so these plays have struck a real nerve. My very first play, The Bonefire, was a satire and I think of satire as my natural voice. It’s a total blast pushing things to their limit and saying the outrageous. I’d love the BBC to commission a sitcom of Michelle and Arlene as there’s an appetite for it.

Can you tell us a bit about your new collection of short stories – Catholic Boy?

It’s hard to talk about a collection as the stories are so diverse, but it’s a dark, witty portrait of contemporary Belfast about the longing for freedom, whether political or sexual. The title, Catholic Boy, comes from one particular story but it really fits the collection. Protestant girls like myself have always had a yearning for Catholic boys – I’m constantly attracted to what seems culturally different or exotic.

Are you working on anything new at the moment?

More plays, more short stories. I can’t tell you the subjects in case you plagiarise them!

Many thanks to Rosemary for taking part in the interview. To celebrate Reading Ireland Month, I will be giving away a copy of Rosemary’s short story collection Aphrodite’s Kiss published by Whittrick Press. Simply comment below to be included in the draw and I am happy to post internationally!