I can’t believe we’re talking about the coffee again. How many times have we gone over this?

Coffee gets talked about a lot in Salvation of A Saint, the follow up to phenomenally successful The Devotion of Suspect X. Once again Keigo Higashino’s novel involves Tokyo Detective Kusanago and his friend and sometime colleague Dr Yukawa, a physics professor known as Detective Galileo. Galileo uses his scientific knowledge to help the Tokyo Police Force to solve crimes of an intricate nature. 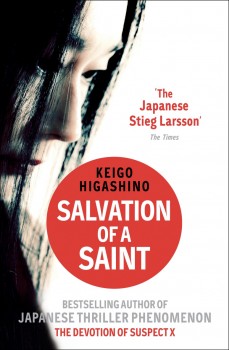 With this latest case – Yukawa’s skills are greatly needed. Yoshitaka Mashiba has been found dead in his secured home, poisoned while drinking a cup of coffee. The most obvious suspect is his wife Ayane – however she was hundreds of miles away at the time of the poisoning – visiting her parents.

She has motive though. She and her husband had a contract in place stipulating that if she did not get pregnant by the time one year of marriage had passed, they would split up. The deadline has been reached, Ayane is without child and her husband has already moved on to a new potential mate – Ayane’s friend and colleague Hiromi.

However, there is also the possibility that Hiromi herself could have committed the murder as she was the last person to see Yoshitaka, in fact, the last person to have drunk coffee with him. Could she have managed to poison the coffee without drinking any herself? Or was it an ex-partner, one who entered the house after Hiromi’s visit to take revenge? Or was it a painful kind of suicide? It seems to be, for a time, the perfect murder.

Add to the mix the fact that Kusanago is developing feelings for the murdered man’s wife and does not want to entertain any theory in which she might be the perpetrator and you have all the ingredients for a great mystery.

Salvation of A Saint is really a drawn-out ‘locked room’ mystery. Detective Galileo comes up with theory after theory of how the poison was administered and sends Detective Kusanago and his partner Kaoru Utsumi off to test their veracity, with ever diminishing returns.

Unfortunately Higashino’s novel is also a victim of diminishing returns. The opening chapter pretty much tells the reader who the murderer is, meaning any tension that might be built up is lost, as the whodunit remains resolutely a howdunnit.

If the trick I’m thinking of was used, it’s highly likely that there will be some tell-tale traces remaining. That’s why I had the filter sent on to Spring-8 to trace. But even if they find no trace, it doesn’t prove that the trick wasn’t used. That’s the kind of problem we’re dealing with here.

And that is the problem. The mystery of the poisoned coffee is just not enough to sustain the book, particularly when the identity of the murderer is known from the beginning.

Salvation of a Saint does have some tight, clever plotting at its core and Detective Galileo is a witty, engaging central character. It is smoothly translated by Alexander O. Smith with Elye J. Alexander, although the repetition of the phrase ‘Huh?’ gets a little jarring after a while. The relationship between Kusanago and his partner Utsemi is also interesting as he blames her theories disparagingly on ‘female intuition’ when in fact, she is generally right.

It’s hard to care about the central crime as the characters essentially aren’t very pleasant people, but the intricacy of the plot and a nagging need to know how the crime was committed is essentially what pulled me through.

Salvation of A Saint is my third book for my 2018 in Translation challenge.