At one point during Occupied City a character notes

This could be a particularly apt description of what it feels like to read Occupied City. David Peace has a very particular style and it is a style I think that either you get on with or you do not. I do, but I completely understand those who do not. 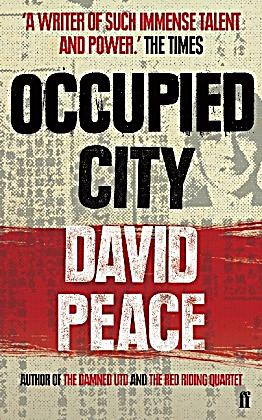 If I was to write this review in the style of Occupied City, it might start like this.

I have a book.

I don’t mean to be flippant, but Peace’s repetitive, highly stylised prose can be hard to endure. Having read the first book in his Tokyo series, Tokyo Year One and his Red Riding series, I am well used to what to expect and find reading one of his books to be an act of submersion, or even submission. Once you go with it and accept his idiosyncrasies, his novels are well worth it.

So, how to describe Occupied City? Ostensibly, it is a fictionalisation of a real life crime that was carried out in Tokyo in January 1948. During the third year of the US occupation, a ‘health inspector’ entered the Teikoku Bank at closing time and warned staff that there had been an outbreak of dysentery in the area. He told them that he was there to administer a serum, which would inoculate them from infection. What he in fact administered was poison and twelve of the sixteen bank workers and family members died in agony. The killer then made off with 164, 405 yen.

An artist, Sadamichi Hirasawa confessed and was convicted of the murders, but later recanted this confession and his conviction was never considered safe. Despite receiving the death penalty, no one ever signed the warrant and Hirasawa died in prison in 1987, still maintaining his innocence.

As plots go, it is relatively straightforward, but nothing can prepare you for the manner in which Peace presents his story.

Talking as a framework, the Japanese tradition of ghost story telling (which has roots in the occult), where different narrators tell part of a story before extinguishing a candle, ultimately leaving the listeners in total darkness, Peace tells the story of the Teikuko bank Massacre through 12 different narrative forms.

The victims in a collective funeral dirge describe the crime itself. A detective investigating the murders enters notes into his logbook. A journalist deepens the mystery through stories he publishes and more tellingly, stories that are pulled from publication. In the most personal section of the book, an investigation into Japan’s use of biological warfare is told through the reports and letters home of an American soldier until finally, the supposed killer shares his unreliable story.

As the details build up from narrator to narrator, Peace seems to bring the reader to the conclusion that the bank massacre is linked to the notorious Unit 731, a covert biological warfare research unit of the Imperial Japanese Army who are said to have been responsible for human experimentation during World War II

Whether this it true or not, we can never know. Peace may be trying to uncover a larger conspiracy, but it can never be uncovered, and especially not in fiction. One feels that Peace knows this as his mysterious narrator, the master of the game says

no more solutions sealed in envelopes

no more puzzles, no more games

in the candlelight, in the half-

light, only fragments, fragments here. Here where nothing is rational, nothing is fair, where there are no happy endings.

It is an interesting way to tell a traditional crime story – presenting the inner workings of the text to expose the truth and technically, Peace excels. Each section is unique, in both form and style, from the stilted clichés of the crime reporter to the redacted formal language of military reports. His narrators all have their specific rhymes and repetitions.

In a section devoted to a local gangster, each paragraph starts with

IN THE OCCUPIED CITY, in Mejiro own, in a wooden building, in an upstairs office, tap-tap, knock-knock, bang-bang, ‘Who’s there?’

In the journalists’ section, each paragraph starts with ‘IN THE FICTIONAL CITY’ and in the detective’s logbook; there are regular descriptions of the Tokyo weather.

The victims, who act as a kind of Greek chorus, repeat and repeat

so we are weeping. Always, already the weeping –

here, we who were once the living –

now weeping all the time, here –

The novel takes on a kind of hypnotic rhythm due to the constant repetition of phrases. It becomes a claustrophobic narrative, constantly circling round on itself. This can be annoying at times, in fact, there is an entire section, voiced from the point of view of a second detective, who appears to be having a nervous breakdown, which is almost completely unreadable.

Despite this, I raced through Occupied City, although I do think it is a book to be admired rather than enjoyed. At times, Peace can seem like a writer showing off for no discernible narrative reason, but I do think there is no one out there quite like him, in terms of how far he pushes his readers and his skill cannot be denied.