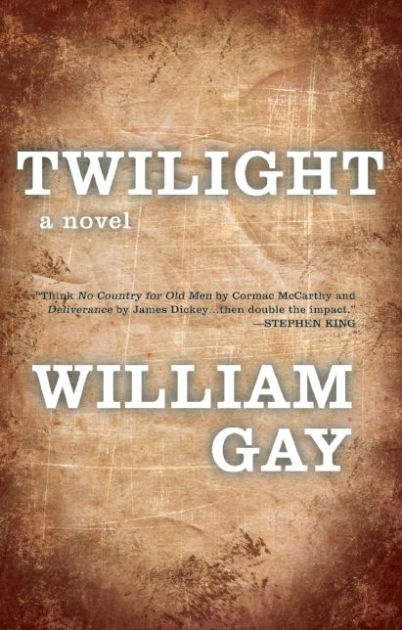 Twilight sets out its stall from the opening pages as a wagon full of a dead family, dog included, are driven into town somewhere in Tennessee. They’ve met a grisly end and appear to be unwitting victims in a wider conspiracy – one that has its beginnings at the door of the local undertaker.

Aligned so and staring at the uncaring sky they are beyond any commiseration you might have for them and you’d be hard put to come up with a sin they might have committed enormous enough to have brought them to so shoddy and end.

Brother and sister Kenneth and Corrie Tyler learn the hard way that some things should be left alone. When they discover that their town’s undertaker, Fenton Breece, hasn’t buried their father properly, they dig deeper. It seems Breece hasn’t been burying anyone properly – filling caskets with rubbish, mutilating bodies and even burying empty caskets.

There’s things in this world better let alone. Things sealed away and not meant to be looked upon. Lines better not crossed, and when you do cross em you got to take what comes.

Determined to seek revenge, Kenneth seizes an opportunity to steal Breece’s briefcase, only to discover pictures of Breece with corpses arranged in sexual poses. They decide to blackmail him with the pictures, but Breece hires Granville Sutter, a psychotic murderer, to get his pictures back. As Sutter chases Kenneth across the desolate landscape of Tennessee, you know things aren’t going to end well for anyone.

Twilight is an incredibly cinematic book – echoing the movies of the Coen Brothers or The Night of the Hunter. Characters are swiftly drawn but still sympathetic and you could imagine a film version featuring craggy old actors like Harry Dean Stanton or Jeff Bridges.

As Kenneth Tyler runs from Granville Sutter trying to find a law enforcement agent who isn’t corrupt, he gets lost in the woods of Harrikin on the outskirts of town. In vignettes straight from a Grimm’s fairy tale, he meets an array of people, all living hard lives and not keen to meet the trouble he is bringing, given that they have enough trouble of their own. An old woman wants him to paint her dead husband’s truck in return for stolen pie while an old witch sees Tyler’s predicament for exactly what it is.

There was more wickedness in the world than you thought and you’ve stirred it up and got it on you, ain’t ye?

Twilight is a wonderfully dark, thick slice of Southern Gothic that eschews subtlety for atmosphere. Everything you could want from the genre is here – necrophilia, murder, grotesque characters, blackmail and a manhunt all played out in an overblown but often beautifully descriptive prose.

There in the shadows he seemed a darker shadow than those he moved among, some beast composed wholly of the ectoplasm of the night and with some arcane magnetism drawing to itself old angers and discontents and secret and forbidden yearnings freefloating in the humming and electric dark.

The narrative is written in a particularly literary way, elevating the shoddy crimes it describes with a mythic reverberation, echoing other Southern writers like McCullers or Faulkner. The dialogue however is pitch-perfect in its normalcy, dry and oblique and capturing a very particular black humour.

Folks don’t always get what they want. It’s people in hell cryin pitiful for Eskimo Pies but they ain’t handing any out.

Just as there is a lack of subtlety, there is also a lack of depth in the psychological characterisations in Twilight and yet, it works to the advantage of the book. There are no discerning motive here, save self-gain. What has caused Fenton Breece to treat the dead the way he does? Who knows? Breece doesn’t even seem to know himself

He had a horror of people but he’d learned to control this too. All he had to do was imagine them naked and dead on his table with the pump humming their blood away and he’d be able to hold his own.

Has something happened to Granville Sutter to make him a killer? A man his peers see as the embodiment of evil? Again, there is no explanation. It may be money, or it may be something deeper, but Gay seems to be saying that evil exists in the world, horrible things can happen and we may not always be able to understand why.

He isn’t going to give the reader the comfort of understanding, nor the option of looking away.

I read Twilight as part of the R.I.P Challenge and look forward to reading the other William Gay I have in the 746 – Little Sister Death. I think I’ll leave it for next year’s RIP Challenge – Gay’s style of gothic, enjoyable as it is, goes a long way!