With his debut novel I’m Thinking of Ending Things, Iain Reid proved adept at capturing a growing sense of suspense and dread which finds its release in a surprising and unforeseen denouement.

Foe, his second novel, is structured in a similar way. It has a bizarre but strangely believable premise and builds a claustrophobic sense of unease before revealing an ending which, like its predecessor, drives you back to the beginning of the book, looking for the clues you inevitably missed. 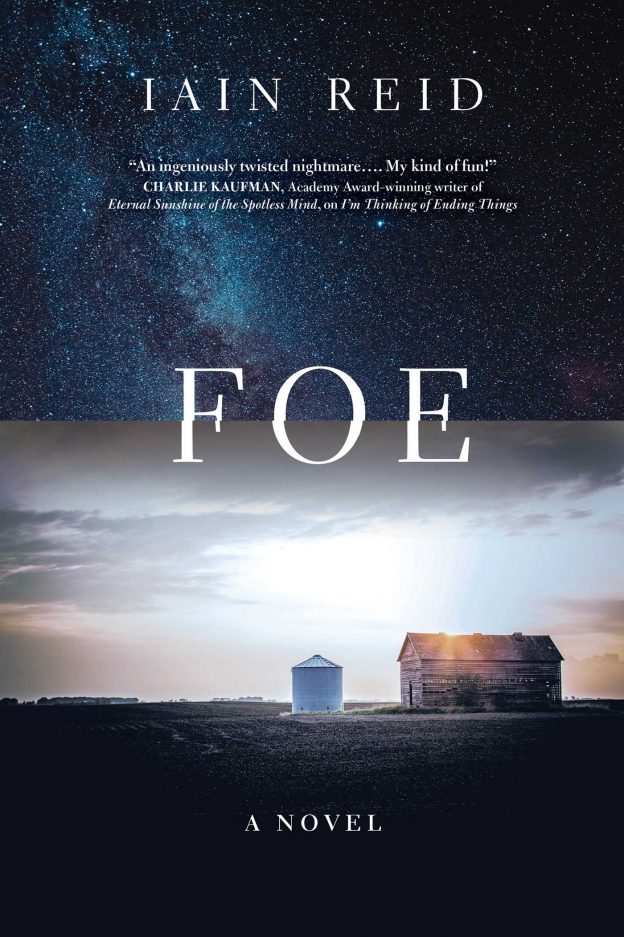 Foe is a book that benefits from little prior knowledge but the basic premise is this.

Set sometime in the future, Junior and Hen (short for Henrietta) are a young married couple living on a remote, rural farm. They live a quiet, seemingly happy life and keep themselves to themselves. This quiet life is rocked one evening by a visit from Terrance who has news. Junior has been selected, by random lottery, to be one of the first inhabitants on a space station, leaving his life on earth at some unspecified point over the next two years. Terrance must live with the couple on and off, to prepare them both for Junior’s departure.

Reid doesn’t go into many details about the specifics of Junior’s trip, nor about the company ‘Outermore’ for whom Terrance works. This is a very human focused style of science-fiction, where the very vagueness of what is happening works to the books advantage.

Terrance, Junior and Hen prowl around each other as if in a Beckett play as Terrance harvests data from Junior to help prepare for his trip. Terrance is cheerfully bullying, almost nerdish in his approach. Junior is openly confused by the whole situation and is more concerned for Hen’s wellbeing that for his own. Hen, meanwhile, is strangely passive and uncommunicative but there is a growing sense that she knows a whole lot more than she is letting on and the entire process seems to be bringing issues in Junior and Hen’s relationship to an uncomfortable head.

As a page-turning thriller, Foe is incredibly successful with its well-paced narrative that builds to a successful reveal. However Reid has given it a real depth as he explores the limits of human communication and our relationship to technology.

Why is Junior so passive in his reactions to what is happening? He doesn’t want to go on the mission, but doesn’t feel he can say so. He allows Terrance to interrogate every part of his life from his shoe-size to his food preferences to his intimate relationship with his wife and appears unconcerned as to what is being done with that data. It’s a timely theme, asking the reader to question how much of our own lives we passively allow large corporations to have access to.

Terrance puts his hand out as if to apologize. “Please,” he says. “I’m not being clear. I’m not explaining things very well. It’s not surveillance or active listening. The microphones in your screens are always on – you know that. It’s data collection. The program we use sorts through the information, categorizes it. It recognizes words of interest.

The relationship between Hen and Junior is also subtly excavated. Junior and Hen appear happy with their isolated, quiet existence, but the arrival of Terrance suggests that Hen might not be as happy as Junior has thought. Hen feels constrained by their life and doesn’t seem to relate to things in the way Junior thinks she does. Junior is convinced that he is Hen’s protector, that she is dependent on him. Hen doesn’t see it quite that way. Does Junior really know Hen as well as he thinks he does? Is it possible to really know anyone completely, no matter how close?

There are so many instances when I’ve expected you to understand how I’m feeling, and it just doesn’t happen. It’s so discouraging, draining. It’s like as long as we are here, moving from day to day, you’re convinced that I’m happy.

As the misunderstandings and lack of communication between them grows, they slip further apart, despite the fact that they face a long separation. It seems that the longer Terrance remains a presence in their house, the less likely they are to get to the truth.

Isaac Asimov said that “[Social] science fiction is that branch of literature which is concerned with the impact of scientific advance on human beings” and like the best works of science fiction, Foe is most particularly interested in what constitutes our sense of self.

I’ll miss her steps and the way she blows her nose. I wonder what else I’ll miss. I wonder what she privately knows about me that I might not even know about myself. What will she miss when I’m gone?

Foe is a novel of real philosophical and psychological depth, at once a page-turning thriller which demands to be read in one sitting and also a questioning exploration of what it means to be human and to try and make connections. Reid examines the isolation that can exist within intimacy and his novel echoes with the most unnerving of all questions – will I be missed if I’m gone?

I received a copy of Foe from Netgalley and read it as part of my R.I.P Reading Challenge. This is the second Iain Reid book I have read in as many months and his is an exciting new voice. I look forward to seeing what he does next.