Five Star Billionaire is an ambitious, but not wholly successful attempt to evoke the overwhelming scale and pace of modern day life in Shanghai, told through the loosely connected lives of five Malaysian Chinese immigrants. In different chapters, all titled with the recognisable cliché of self-help speak, each character struggles through Shanghai trying to make a success of the opportunities they find in this overwhelming city, but finding their lives in freefall against the backdrop of this unforgiving city. 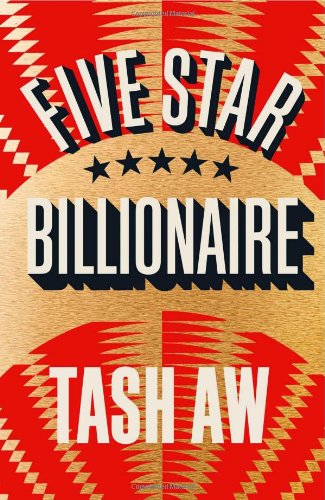 Phoebe, is an ambitious young Malaysian village girl, who reinvents herself in person and online when the job she was promised in this shiny new city turns out to be less than she expected. Gary is a pop star at the top of his game, whose life is thrown into a tailspin when the pressure gets too much and he is filmed losing his temper in a Shanghai bar. Yinghui seems to have conquered the city as a successful business owner with several lingerie stores, but her friends see only a woman who is yet to find a man. Justin also seems to have it all as the head of his family business, but he suffers a breakdown when the family fortune is lost.

Yinghui and Justin knew each other in the past. Phoebe ends up working for Yinghui and talking to Gary in an online forum and Justin befriends Phoebe’s roommate. These are tenuous threads and all seem to be held together by Walter Chao, a mysterious businessman and author of self-help books who seems to have an interest in all the characters.

It is an interesting set up and the early chapters work well, as the reader is introduced to each character and their increasingly desperate attempts to make their mark in a city that is moving too fast for them to keep up.

You must appreciate that time is always against you. It is never kind or encouraging. It gnaws away invisibly at all good things. Therefore, if you have any desire to accomplish anything, even the simplest task, do it swiftly and with great purpose, or time will drag it away from you.

Shanghai itself is another character in the book, a cold fast-moving city where connections are hard to make and harder to maintain and where no one seems to know who anyone really is. Walter Chao is presented as the puppet master here, using these characters for an unknown reason, but it is the city itself that comes across as the true villain of the piece.

Five Star Billionaire is a novel about the inability to connect, because characters feel that they can’t show their true selves. Phoebe changes her name and pretends to be from China. Gary chats to Phoebe online but can’t tell her who he really is. Yinghui and Justin are trying to escape from their pasts and their family history but find that, in a city that is all about the new, the past is what will eventually catch up with you.

And herein lies the main issue with Five Star Billionaire. It becomes tangled up in the past and loses the urgency and pacing that characterised the opening chapters. The backstory between Yinghui and Justin is so drawn out that it could be a novel in its own right and – despite being an integral part of the denouement – lacks sufficient interest to justify its inclusion.

The story of Gary, the pop star, never feels sufficiently integrated into the novel as a whole and some of the coincidences lack coherence, particularly in a city the size of Shanghai. Why would Justin, a wealthy executive, live in the same apartment block as the struggling Phoebe? Why would Yinghui, an experienced business owner, invest in a business deal without doing basic background checks on her colleagues?

The novel feels like it is building towards a real cliffhanger, and as the information is drip-fed into the narrative, a tale of revenge emerges, and that does not have the anticipated drama. Which is a shame, because there is a lot to like in this novel. Tash Aw seems to want to write two books, one exploring the loneliness of life in a big city, where people hide behind the transience of material possessions due to an inability to make sincere connections, and another about a mysterious figure who is determined to revenge the wrongs done to his family.

The two strands don’t quite gel and consequently, Five Star Billionaire does not quite succeed in what it sets out to do.