Reading The Country Girls today, it is hard to imagine the outrage and scandal it generated when published in 1960. Criticised, banned and even burned, The Country Girls, with its tale of convent girls growing up in a small village in Ireland is often credited with opening up the discussion of social and sexual life from the viewpoint of women.

Its frankness and honesty were unlike anything that had come before in post-World War II Ireland and it shone a light on the lives of girls and young women who were growing up under the twin repressive influences of the Catholic Church and traditional rural life. The moral outrage that greeted the books means that the trilogy has become somewhat of a symbol for the struggle of Irish women to have their voice heard from behind the misogyny and conservatism of Church and State.

The first of the trilogy – The Country Girls – traced the lives of Cait and Baba through their childhood friendship at boarding school under the stifling atmosphere of 1950s rural Ireland through to their sexual awakening and their move to Dublin.

In the second book – Girl with the Green Eyes – the focus was mainly on Cait, now renamed Kate by her married film producer lover. Kate has run off to live with Eugene to the disgust of her father and the small town where she came from and where she is humiliatingly dragged back to. 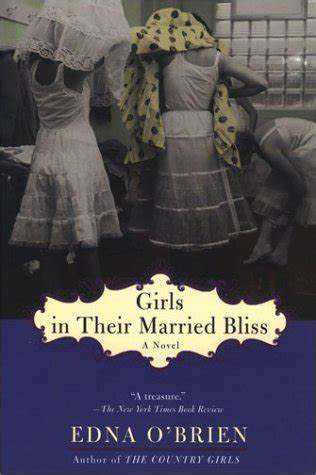 In the third and final instalment of the trilogy, the ironically titled Girls In Their Married Bliss, Cait is no longer the narrator, rather Baba, the wilder of the two, takes over the narrative voice. Girls In Their Married Bliss is a vicious examination of marriage in Ireland in the 60s – how you could be trapped in it, either through bad choices or bad luck, but mainly because as a woman, you lacked any agency of your own.

Baba and Cait are finally married, the culmination of everything they have ever striven for, but neither are happy. Baba is married to a coarse millionaire builder, Frank, who can give her all she wants but for whom she feels no love. Cait has now become Kate entirely, married to Eugene, her lover from the second book and mother to a beloved son. Her marriage however, is a loveless one, and she tries to find happiness, yet again, in a romantic entanglement with a married man.

As the two try to navigate their marriages, with affairs and flirtations, they are reminded at every turn that there are two sets of rules in society, one for men and a harsher, colder one for women.

Oh, God, who does not exist, you hate women, otherwise you’d have made them different. And Jesus, who snubbed your mother, you hate them more. Roaming around all that time with a bunch of men, fishing; and sermons-on-the-mount. Abandoning women. I thought of all the women who had it, and didn’t even know when the big moment was, and others saying their rosary with the beads held over the side of the bed, and others saying, “Stop, stop, you dirty old dog,” and others yelling desperately to be jacked right up to their middles, and it often leading to nothing

Possibly it was the reaction to O’Brien’s books, their banning and her vilification, that mean Girls in their Married Bliss ends on a pessimistic note. Having followed these two women through all the tribulations of their lives and their loves, the reader is not promised a happy ending. Yet O’Brien’s girls are still revolutionary. They may not succeed in creating their own agency, or in living life on their own terms, but they never stop trying. As Eimear McBride says in her introduction to the Trilogy,

O’Brien’s girls succeed, and do not succeed, in overcoming their internal and external obstacles. The point is that they never stop grappling with the terms of their lives, and the author, in her turn, never relegates their status within those lives to that of best supporting actress. These are always the stories of two young women going out into life, what histories they bring along with them and the futures they create for themselves on the way.

It is hard now to think how revolutionary The Country Girls trilogy must have seemed at the time, with its depiction of female characters who yearn for more from life than the domestic sphere and more than that, take steps to achieve what they want. Even the very language that O’Brien was using would have been, at that time in Ireland, scandalous.

An Irishman: good at battles, sieges, and massacres. Bad in bed. But I expected that. It made him a hell of a sight nicer than most of the sharks I’d been out with, who expected you to pay for the pictures, raped you in the back seat, came home, ate your baked beans, and then wanted some new, experimental kind of sex and no worries from you about might you have a baby, because they liked it natural, without gear.

No one was writing like this in Ireland, let alone a woman writer, and it is inevitable that the furore that surrounds O’Brien’s trilogy can often cast a shadow over the fact that these three books stand alone in terms of their literary and artistic merit.

All three are by turns hilarious and moving, heartfelt and scathing and more than deserve their place in the canon of Irish literature.