Brian Friel is known now to the world as one of Ireland’s preeminent playwrights. However, in the mid 1960’s he was more concerned with the short story. It was a brief dalliance as, by 1968, Friel had stopped writing short stories altogether, in favour of writing plays.

It is said that Friel found the process of writing short stories formulaic and difficult and he told Fintan O’Toole, in 1982, in an interview for the Irish Times, that he felt that he wasn’t creating anything new, but merely imitating Sean O’Faolain and Frank O’Connor

I mean, I was very much under the influence, as everyone at the time was, of [Sean] O’Faolain and [Frank] O’Connor, particularly. O’Connor dominated our lives. I suppose they [Friel’s short stories] really were some kind of imitation of O’Connor’s work. I’m just guessing at it, but I think at some point round about that period, the recognition of the difficulty of the thing, you know, that maybe there was the need for the discovery of a voice and that I was just echoing somebody else.

The short stories collected here in The Diviner are a precursor to some of the themes found in Friel’s later plays. All are set in and around Donegal on the north west of Ireland and all are concerned with how people deal with the pain of their reality.
Friel’s characters cling to make-believe, false hope and a nostalgia for a rose-tinted past in order to cope with the disappointment of their present. 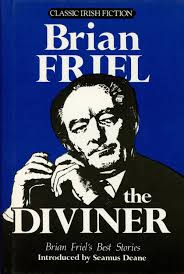 The title story, The Diviner, centres on Nellie Doherty, a widow whose drunken husband has died unexpectedly. After a brief courtship, Nellie remarries and just when it seems that she has found happiness and dignity again, her second husband is drowned in a boating accident.
As the local community attempt to find his body, a water diviner (an early incarnation of Frank from Faith Healer) is called to help with the search, but what he uncovers threatens Nellie’s dignity forever. Her happiness rests not only on her lived experience, but on how that life looks to those around her.
This need to keep up appearances is explored in several other stories in the collection, where characters insist on make-believe as a way to maintain hope.
In The Gold in the Sea, a tourist is taken out salmon poaching at night with a group of locals. Con, the fisherman, insists they will pull in a stunning haul, making a lot of money in the process with ‘salmon so plentiful you could dance a reel on their backs and not wet a toe’. As the night progresses, Con tells of a sunken ship lying under the surface, filled with gold, just waiting to be found, however, like the non-existent salmon, the story of the gold isn’t quite what it seems.
The Potato Gatherers sees two boys mitch off school to help the local farmer with the potato crop. They know that all the money they make will be given to their mothers, yet they spend the day of back-breaking work dreaming of what they will buy with these non-existent wages. These necessary self-deceptions are used to help get through the day, but also apply when looking back to the past.
In Foundry House, which clearly paved the way for the play Aristocrats, Friel explores the idea that the past shouldn’t be revisisted lest we see that it wasn’t as perfect as we remember. Joe and his family have moved back into the gate lodge where he grew up as a boy. The inhabitants of the ‘big house’ ask him a favour and what happens next brings his memories of them into sharp relief, yet he refuses to acknowledge the change.
In Among the Ruins, a man takes his family back to the place where he grew up, only to find that in looking for his misremembered past, he finds something else entirely. 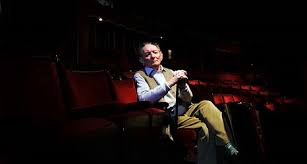 Generations of fathers stretching back and back, all finding magic and sustenance in the brief, quickly destroyed happiness of their children. The past did have meaning. It was neither reality nor dreams, neither today’s patchy oaks not the great woods of his boyhood. It was simply continuance, life repeating itself and surviving.

Friel’s characters are all surviving and looking for the easiest way to get through the day, be in through hopes, memories or nostalgia. They all have an awareness of their self-deception, but it doesn’t matter. What matters is that they are still here. As Seamus Deane says in his introduction to these stories

To recognise the squalor and insufficiency of one’s life by the creation of an alternative fiction is itself and expression of dignity, not simply a flight from reality.

Each of these stories contains a quiet dignity, a sense of knowing humour and a strong sense of place – all the qualities that make Friel’s plays unforgettable and which make for a set of moving and evocative stories.