Tuesday Nights in 1980 encapsulates two things I love in a book – a New York setting and a story about the art world. 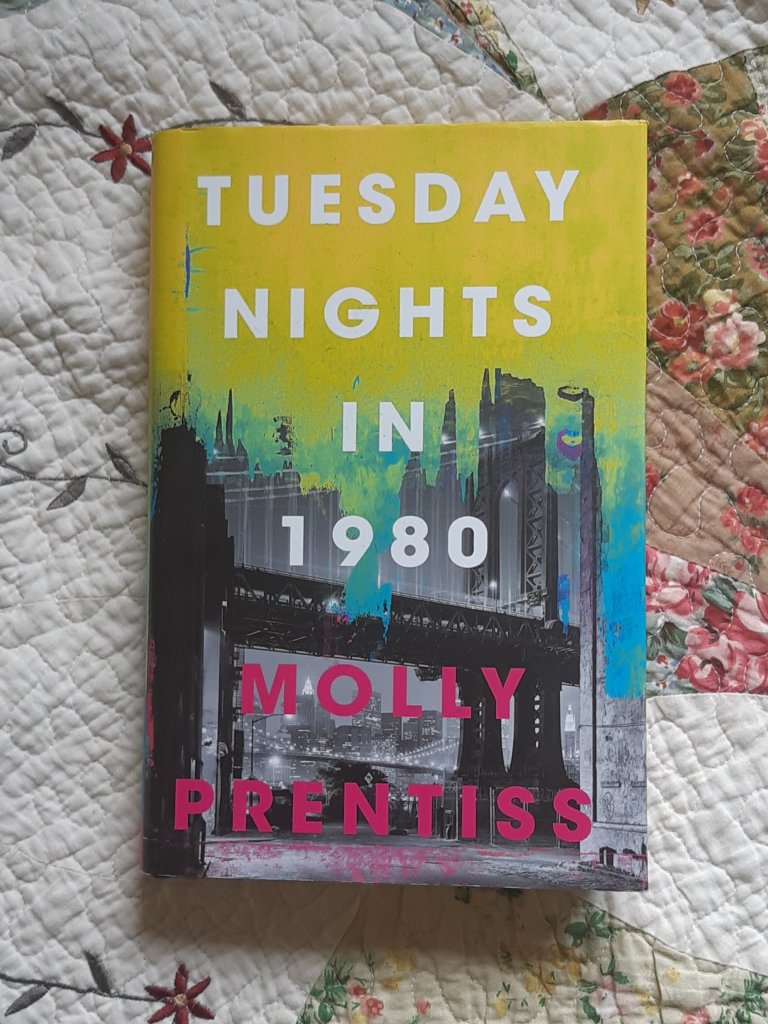 Prentiss’s debut novel asks big questions about talent and purpose – what do we do, when we can no longer do the thing the we define ourselves by?

The novel begins on New Year’s Eve, 1979 where the lives of three people are about to collide, driving the narrative of the book.

James, an art critic for the New York Times, has synesthesia meaning that the things he sees and feels are translated to colors and smells. His wife Marge, the main breadwinner of the couple, exudes variations of the color red and now that she is pregnant, she makes him think of a pomegranate full of seeds. James’ synesthesia means he has become a darling of the art world, always able to spot the next big name, and to write about art in an unparalleled way. This ability has also allowed him to amass an art collection that is the envy of all the collectors in town, only James won’t sell, despite the financial pressures that he and Marge are under.

It was true, he knew, that his brain – a brain in which a word was transformed into a color, where an image was manufactured into a bodily sensation, where applesauce tasted like sadness and winter was the colour blue – was the reason he was on the front page of anything, on anyone’s lips, at a party like this one. Hie synesthesia . . . had unlocked a key to a world of art he would never have been invited into otherwise.

At a New Year’s Eve party, hosted by shrewd gallerist Winona George, James has a brief encounter with artist Raul Engales, a raw talent who has left his politically motivated sister sister in Argentina to make his name in New York. Raul is full of arrogance and ambition, living in a squat and sneaking into NYU Art College to paint, knowing that the future is his for the taking, particularly now that Winona is interested in him.

Raul leaves the party and goes to a bar, where he meets Lucy, a young naive woman from Idaho who has come to New York with no more plan than to find out who and what she wants to be.  This night, and these meetings will change all their lives forever.

An accident at the party leaves Marge inconsolable and robs James of his synesthesia: and thus not only his career as a critic, but his unique way of seeing the world. Raul and Lucy fall head over heels in love, but life will take an unexpected turn for Raul just as he is about to have his first show at Winona George’s celebrated gallery.

The story is told from the view of each of the protagonists as their lives become more entangled, played out against the back drop of the New York art scene in its heyday. Prentiss confidently depicts the rough and ready nature of this scene in all its glorious chaos, dropping in real characters (Jean-Michel Basquiat, Keith Haring) to the fictional world.

She captures that elusive moment in time, where the days of experimentation and underground art culture gave way almost seemlessly to an era of consumerism and capitalism and this is what gives the novel great drive and energy.

You are underestimating of the power of the associative brain! That’s what an artist is! Someone whose way of looking at the world – just their gaze – is already an idea in itself!

Depicting James’s synesthesia is a big risk for a writer, but the section introducing his peculiar way of interpreting the world is one of the best in the novel and his character is its beating heart. Beside James’ oddity and Raul’s raw magnetism, Lucy is a somewhat blander character.  Veering close to cliche at times her character sometimes seems to exist just as a way to link the men, or to convey the passion and excitement of the scene in which she’s found herself. She idolises artists but there is never the sense that Lucy is anything more than audience.

A lot happens in this novel and Prentiss is happy to flirt with melodrama at times. There are accidents and orphaned children, coincidences and often implausible turns of events. And yet she keeps it all on the right side of believable with humour and insight. All of her characters are driven by some nameless yearning that forges their path through this mad city at this exciting time.

New York becomes a  dynamic character in its own right – a city of grime and poverty but also of excitement and possibility. Above all, it’s a place of hope – a city where misfits can still find a place to fulfill their dreams.

Molly Prentiss has written a love letter to a place and time and Tuesday Nights in 1980 is a thrilling evocation of the squalid exuberance of New York and an insightful exploration of creativity, loss and self.

Tuesday Nights in 1980 might stretch credibility a little along the way, but the destination makes it all worth it.