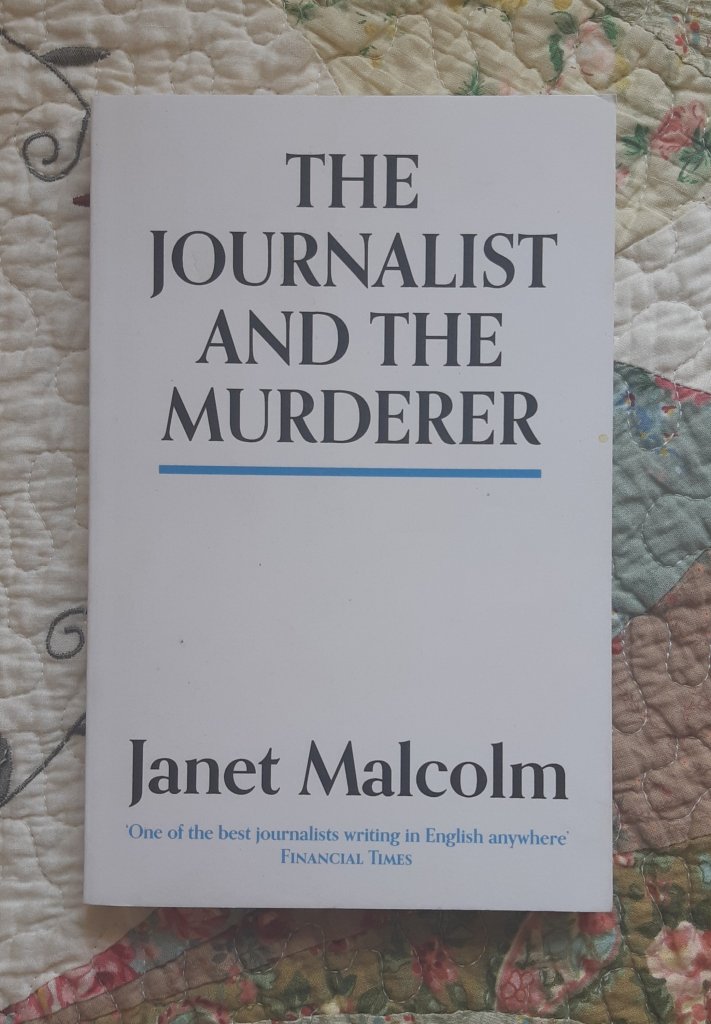 Janet Malcolm starts as she means to go on with the opening lines of this strident and fascinating book.

So begins her exploration into the role of journalist and subject, or in this particular case, between journalist and murderer. The journalist of the title is Joe McGinniss and the murderer is Jeffrey MacDonald. In 1970, Jeffrey MacDonald was convicted of murdering his pregnant wife and two daughters. Before his trial began, he invited McGinniss to write a book on the case from the point of view of the defense team and allowed him full access to the case. McGinniss befriended MacDonald, to the point that MacDonald believed the resulting book would be sympathetic and champion his innocence. That book – Fatal Vision – did no such thing.  In 1984 MacDonald sued McGinniss for fraud and breach of contract, claiming that he had been led to believe that Fatal Vision would show him as an innocent man when in fact McGinniss portrayed him as a guilty psychopath.

MacDonald had friendly and supportive letters from McGinniss sent over three years that backed up his argument, the jury agreed with him, and the case eventually settled out of court for $325,000. The journalist was portrayed as a trickster, one who never believed his subject was innocent, gained his trust and then betrayed him.

The question Malcolm raises is whether this kind of journalistic behaviour is ethical, or even moral, and does it become more complex when your subject is a criminal?

In this taut book, Malcolm explores the lawsuit from all angles, interviewing the lawyers, jurors and witnesses involved and even interviewing the killer himself. It is a knotty moral question. How far should a journalist go to get to the truth of a story? What is the truth of a story? If the subject of the story is a killer, do they still have the right to be treated fairly and openly regardless of their guilt in another case?

Malcolm includes trial testimony from two authors Joseph Wambaugh and William Buckley, who defend a journalist’s right to mislead a subject in order to unearth a story while, in an ironic twist, McGinniss breaks off ties with Malcolm and will not participate in her book fearful of how she will portray him.

Malcolm agrees with the jury and concludes that what McGinniss did was morally wrong. She feels that while he had an obligation to the ‘truth’ of his story, he was – more importantly – obligated to be truthful to MacDonald. She does however note that the relationship between a journalist and a subject is, at its heart, a fake one, where neither side portrays their true self, but instead does what they have to do to get the outcome they desire.

In a press interview, she has discussed the role of the journalist as being that of an actor;

this ‘I’ was a character, just like the other characters. It’s a construct. And it’s not the person who you are. There’s a bit of you in it. But it’s a creation. Somewhere I wrote, ‘the distinction between the I of the writing and the I of your life is like Superman and Clark Kent.

Malcolm concludes that there will always be a moral vacuum at the heart of the journalist/ subject relationship and even as she explores this particular case, she is well aware of her own role in the similar game she is playing.

When The Journalist and The Murderer first appeared in The New Yorker in March 1989, Malcolm was roundly dismissed by the majority of journalists who felt her approach was an attack on their right to present a story by whatever means necessary.

Many journalists also felt, probably fairly, that she didn’t properly highlight the distinction between working journalists and those who write a work of non-fiction which includes a financial contract with their subject in the form of royalties, which muddies the waters even further.

What Malcolm does in The Journalist and The Murderer, is to provide the reader with the chance to understand the often adversarial relationship that exists between the journalist and the subject, and to pull back the curtain on the fascinating and complex way in which journalistic stories are created.